Written by Bestselling Author of Middle School and I Funny, James Patterson with Chris Grabenstein and Mark Shulman, The Treasure Hunters seven-book series is an action/adventure for young adults, filled with action, humor, and love. Illustrations add to the fun and make this an easy to read series for reluctant readers ages 8 – 12 and for us adults that enjoy a good children’s book now and then. 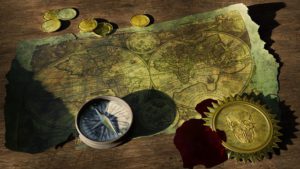 Tommy, who happens to be a great sailor is the oldest of the four and he likes to flirt with every girl he sees. When his father disappears, Tommy is also the ‘Captain of the ship’. Storm is very smart, she remembers everything she sees or reads, she was blessed with a photographic memory, and Bick and Beck are the attentive and tough twins that always fight.

The four Kidd children have been raised on a ship named ‘The Lost’  traveling the world in search of treasure, diving to old shipwrecks, recovering artifacts, swords, and gold coins from the bottom of the ocean.

When their well-known parents disappeared (dad had presumably drowned and mom was captured) the children decided to stay on The Lost and continue their parents’ work. Primarily, this book is about surviving on your own and never giving up.

With their own special talents and treasure hunting abilities, the children continue to search for treasure and work together in the face of danger. They receive threats from secret agents and ninja pirates as well as, Nathan Collier, their father’s evil archenemy and fellow treasure hunter… Among the ship, they also find some pretty big secrets and clues to the whereabouts of their parents.

They have completed their first treasure hunt however, their mother is still missing.  The children are in search of a special artifact that ‘may’ be in the legendary Mines of King Solomon, an artifact that may help them save their mother.

Following the Nile river, the children face many challenges, they survive danger and tolerate threatening environments from the pyramids to the desert and the jungle.

Pirates and evil treasure hunters are on the tails of Tommy, Storm, Bick, and Beck, they want the artifact and they will do anything to get it.

In a race against time, this journey leads the children to China, to the Great Wall, and in to Berlin.

They travel with who they believe to be their father’s boss from the CIA (Timothy Quinn) and try to hold on to the ancient artifact that will ultimately save their mother.

Tommy, Storm, Bick, and Beck receive a video of their mother and eventually find more secrets and clues from their father, including a message telling them to go to Germany.

The Kidd family should be enjoying some time off from treasure hunting. Instead, they are headed to Russia to hunt down stolen treasure.

In Moscow, paintings by Leonardo da Vinci and Rembrandt have gone missing. The Kidd’s are accused of stealing the paintings. Additionally, they are very close to being thrown into prison for a crime they obviously did not commit.

When Bick and Beck find a pirates treasure, they also find a map. The map has more clues to a much bigger treasure. A city made entirely of gold! A lost city in South America.

When the map is stolen the family works together to fight off pirates, snakes, and spears. Storm must use her photographic memory to lead the Kidd family through the dangerous Amazon Jungle. They must get to the lost city before the bad guys do.

Tommy, Storm, Bick, and Beck are back in the United States. They adventure across the country until a conspiracy is discovered.

A forged Bill of Rights. Now the Kidd family must uncover this conspiracy. They must do it before the country as we know it is completely changed.

The Kidd family is on their way to Australia to find Lasseter’s Gold when they are challenged by fellow treasure hunter Charlotte Badger, who challenges them to a race to the gold! But when the Kidds pull into port in Australia, their parents are suddenly arrested-they’ve been framed! It turns out Charlotte Badger is a pirate, and she’s planted a priceless stolen black opal on the Kidds’ ship, The Lost!

Now Bick, Beck, Storm, and Tommy have seven days to traverse the Australian Outback, find Charlotte Badger and her pirate cronies, and bring back the evidence that will prove their parents innocent. If they fail, their parents will be found guilty and thrown in prison…forever!

Thanks for visiting and learning about the Treasure Hunters book series. This is a fantastic series and I hope that you get to share it with your family and friends. Don’t forget to leave a comment and SUBSCRIBE to Alex Cross Addict. Happy Reading!